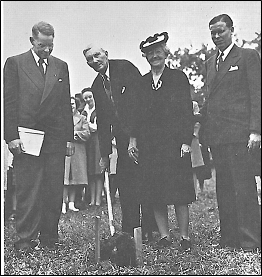 April 18, 1946 – Dr. B.J.W. Graham, Baptist leader, and Mrs. Grace Foote turn the first shovel of dirt for the new Baptist meeting house on Ocean Boulevard. Dr. Louie D. Newton of Atlanta, who delivered the address on the memorable occasion, is at left. The Rev. Charles K. Everett, pastor, is at the right.

In the winter of 1938, Mrs. Grace Foote, wife of Rev. A.E. Foote, contacted Joseph Windsor Graham, an Atlanta minister and former editor of The Christian Index and asked if he would come to St. Simons for a revival meeting.  Rev. Graham invited his Methodist friend, Rev. H.T. Smith of Hapeville, to assist in the services.  After this revival on April 13, 1938, the St. Simons Missionary Baptist Church was constituted.  Thirty-eight members were enrolled as charter members and twelve were received as candidates for baptism.  Dr. Graham, assisted by A.M. McCool, moderator of the Piedmont Association, read the Articles of Faith and the Church Covenant and the St. Simons Missionary Baptist Church was declared duly organized.

This small band of God’s saints began this great church, conceived in love and service and dedicated to the Gospel of Jesus 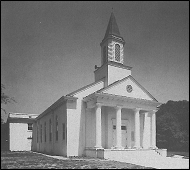 Christ and the outreach of His kingdom.  At the same time, on recommendation from Dr. Graham, Rev. J.J. Winburn was called “sight unseen” as pastor and he accepted the church “sight unseen.”

Soon after the church was constituted, the missionary circles were organized under Mr. J.K. Long and the Training Union under Mrs. Robson Travis.  A committee for song books was a work under the direction of Mrs. Foote, Mrs. Travis and Mrs. Marion McKendree.  A committee was also at work on trying to locate a lot on which to build a church.

In 1942, Dr. Graham returned to St. Simons Island to urge the church people to take positive action in acquiring a building lot.

Approximately two and one-third lots were available on Ocean Boulevard just north of Demere Road.  In conference, the members acted quickly and a motion to buy the lots was unanimously approved.  With pledges of $2,205, an additional $374 was needed to cover the purchase price.

In November 1942, the first building fund was started with a Thanksgiving Money Tree.  Members brought their special offerings and attached them to the tree in the community center.  The final amount was $5000. 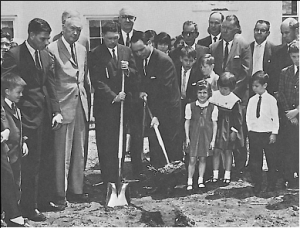 Continuing the example of those who came before, ground was broken on April 11, 1965 and completed in August of that year for the Youth Educational Unit. The unit contained ten Sunday School departments.

Dr. Graham returned to Atlanta, but through his efforts, many donations for the church were collected.

Culminating many years of working toward the goal of a beautiful house of worship, the ground was broken on April 18, 1946.  Dr. Louie D. Newton of Atlanta was the principal speaker with Dr. Graham and Mrs. Grace Foote jointly turning the first spade of ground.  At the time of groundbreaking, the membership had increased to 214 persons and by October 1946 it had grown to 221 persons.  The laying of the cornerstone was held on February 27, 1947.  The building cost was approximately $42,000 — all except about $7000 had been paid by Sunday, June 6, 1947 when the doors were opened to services. 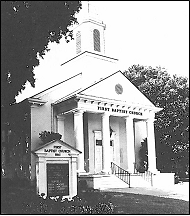 In 1948 some confusion existed regarding the correct name of the church.

To remove uncertainty, it was resolved that the name should be known as the First Baptist Church of St. Simons Island, Georgia. 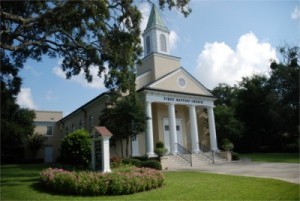 1954 — Annex building from the Community Church moved to First Baptist Church to be used for Sunday school.

1964 — Bonds sold to finance additional youth  unit, containing ten Sunday school departments and enlarging the sanctuary to a capacity of 500 by means of a balcony and enlarged auditorium.

1985 — Purchased pipe organ, and made additions and renovations to buildings.

1993 — Planted a mission church—Marshes of Glynn Baptist Church in Brunswick.

2011 — Renovated the Pre-school and Youth departments.